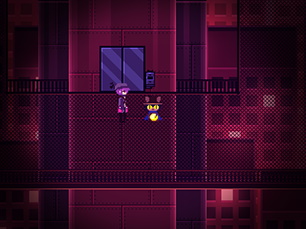 Well wasn’t this little game a treat? We received OneShot by Future Cat as part of the Bundle for Racial Justice and Equality on itch.io, and though it is a single-player adventure puzzle game, we still had a blast solving it’s puzzles and figuring out its secrets together. You play by guiding a little cat-person named Niko through a solemn, atmospheric world in need of a new sun, and along the way, you learn about Niko, a mysterious entity who wants to hinder your progress, a mysterious entity who wants to help your progress, and a whole slew of characters trying to survive in a bleak world. Not only did it leave us feeling like we’d experienced something profoundly sad, yet hopeful, the way this game tells its story is incredibly clever and makes it so you can’t help but feel like your actions and choices really matter. Though we finished the game a week ago, I can’t force myself to remove it from my desktop, because the game itself could almost be its own living world. Play it, even for the full price of ten dollars on Steam, and don’t look up spoilers (and fair warning, the game leaves spoilers even in its own folder on your hard drive. Don’t go digging!)